Day 1**Sep. 4 | Honolulu –> Shanghai
We start our vacation by boarding an international flight bound for Shanghai, the “Paris of the East,” China’s largest city and one of the world’s most important ports.  Meals and snacks will be served on the plane.

Day 2**Sep. 5 | Shanghai –> Wuhan | (D)
Upon our arrival at Pudong International Airport, we will take a short flight to Wuhan, an ancient, yet modern city and the capital of Hubei province.  Former cradle of the brilliant Chu Civilization, Wuhan was an important commercial hub, as its merchants set out on the Yangtze on trade missions.  It remains a central economic presence today.  Upon our arrival, an Air & Sea Travel representative will greet and escort us to the hotel after having dinner.

Day 3**Sep. 6 | Wuhan | (B, L)
Today, we will visit Hubei Provincial Museum, located in the Wuchang District of Wuhan. It collects, protects, and exhibits the cultural relics discovered in the province. Since 1953, it has collected over 200,000 cultural relics, including pottery, porcelains, jade, bronze vessels, ancient weapons, and ancient musical instruments.

Day 4**Sep. 7 | Wuhan/Maoping  Yangtze River | (B, L, D)
Today, we will drive to Maoping and start our Yangtze River Adventure when we embark on a 5-Star River Cruise Ship — Century Glory, a luxury ship that is the new shining star of Century Cruises. Making its first voyage in September, 2019, it is the newest, largest, and most luxurious cruise ship sailing on the Yangtze It is 149.98 meters long and 21.2 meters wide, and can accommodate up to 650 guests in spacious cabins.  For the next five days, we will sail into an astonishing world where fishermen scoop their catches with large handmade nets, families tend to water-laden rice fields and timeless monasteries perch on cliff walls.

Day 5**Sep. 8 | Yangtze River | (B, L, D)
In the early morning, we can practice Tai Chi on deck.  Tai Chi Chuan is a sophisticated method of fighting based on the reconciliation of dynamically interacting forces. Daily practice of Tai Chi promotes mental clarity and a healthy body, assists with balance, and helps blood circulation.  After a buffet breakfast, we will sail through the western part of Xiling Gorge, the longest of the three gorges known for its swift currents and dangerous shoals.  We will take a Shore Excursion to the worksite of the Three Gorges Dam Site.  The dam is the largest water conservation project for flood control, generation of electricity, cultivation, and flood discharge.  In the evening we will have the Captain’s Welcoming Banquet and a Crew Cabaret show.

Day 6**Sep. 9 | Yangtze River | (B, L, D)
This morning, the ship will enter Wu Gorge, famous for its meandering waterways and mystical, ever-changing fog that hovers over the river.  We will take a Boat Excursion to explore the Shennv Stream or “Goddess Stream”.  The scenic area of Shennv Stream is a newly-developed scenic area with the construction of the Three Gorges Project.  Due to the steep mountains, deep valleys and turbulent water, very few people reach this area, so the sceneries are still in pristine condition and are worth visiting.  Some of them are so vivid that we would find it hard to believe they exist.  After lunch, the ship will enter Qutang Gorge, the shortest, narrowest, but most striking section of the three gorges, with sky-soaring majestic mountains on both sides.

Day 7**Sep. 10 | Yangtze River | (B, L, D)
Today, a Shore Excursion is scheduled to Shibaozhai (Stone Treasure Fortress), an isolated steep peak along the river bank.  We can take a staircase to the top of a magnificent twelve-story red pavilion built on the peak.  The Three Gorges Dam would have submerged the base of the red pavilion but a coffer dam was built around the base to protect it from the rising water level.  After lunch, we can attend Culture Lectures.  Topics include the evolution of the dam project and its importance to China, the immigrant life of the people along the three gorges, the history of Three Kingdoms, Chinese medicine, poetry, language, calligraphy, and dumpling wrapping.  The Captain’s Farewell Dinner is arranged for tonight.

Day 8**Sep. 11 | Yangtze River  Chongqing –> Lhasa | (B, D)
After breakfast, we will disembark in Chongqing and take a short flight to Lhasa, the spiritual and cultural center of Tibet, often celebrated as “The Roof of the World.”  To Tibetan Buddhists, Lhasa is a holy land—the pilgrimage center of the region. Breathtaking Himalayan beauty, ancient culture and spiritual tradition converge here, drawing those who seek serenity and peace.  Upon arrival, we will check into our hotel.

Day 9**Sep. 12 | Lhasa | (B, L, D)
This morning, we start our tour by visiting the magnificent Potala Palace. It is now on the list of Chinese national key protected cultural relics and is the most valuable storehouse in Tibet.  This towering hilltop fortress, the traditional home of the Dalai Lama, rises 13 stories and boasts 1,000 rooms and the tombs of several Dalai Lamas. It is a stunning repository of the statues, tombs and personal effects of its past revered residents. About 3 miles to the east of Potala is the most revered religious structure in Tibet – Jokhang Temple.  It is the holiest site in Tibet and the ultimate pilgrimage destination for Tibetan Buddhists.  As part of Potala Palace, it was listed as the world cultural heritage by UNESCO World Heritage Site in 2000.  As a symbol of Lhasa, Barkhor Market is a place full of religious atmosphere and a world of exotic items.  For visitors, Barkhor Market is a magical place showing the original outlook of Lhasa.  It was paved with hand-polished stone boards.  Though it is not broad, it accommodates thousands of tourists every day.  Varied shops are on both sides of the street and stands are on every corner.  Most of them sell prayer wheels, long-sleeve ‘chuba’ (the Tibetan people’s traditional clothes), Tibetan knives and some religious objects.

Day 10**Sep. 13 | Lhasa | (B, L, D)
In the morning, we will visit Norbulingka, the Tibetan summer palace built by the seventh Dalai Lama in the 18th century.  Every March 18th of the Tibetan calendar, Dalai Lama moved here to spend his summers.  During the summer and autumn months, Norbulingka becomes a recreational hub with dancing, singing, music, and festivities. It houses large collections of Tibetan carpets, Italian chandeliers, Ajanta frescoes and many other precious artifacts.  In 2001, it was placed on the list of UNESCO World Heritage Sites and was added as an extension of the Historical Ensemble.  Tonight, enjoy Traditional Tibetan Song and Dance Performances.

Day 11**Sep. 14 |  Lhasa | (B, L, D)
Today, we will visit the highly respected Sera Monastery, an important center of Buddhism that has grown into neighboring India and several other countries.  This afternoon, a Tibetan Home Visit is arranged.  Nicely decorated Tibetan houses provide us with a vivid picture of local people’s life.  Tonight, enjoy a traditional Tibetan dinner.

Day 12**Sep. 15 | Lhasa –> Shanghai | (B)
After breakfast, we will depart for our flight to Shanghai, an intoxicating city of paradoxes and celebrated for both its colonial-era architecture along the famous Bund promenade and the futuristic skyline of its glittering Pudong district. British, French and American traders were granted parcels of land here known as concessions in the 19th century; today, their influences blend with a distinct Chinese sensibility. Shanghai remains one of China’s most open and welcoming cities.  Upon arrival, we will check into our hotel.

Day 13**Sep. 16 | Shanghai | (B)
Today, enjoy free time to relax and explore this fascinating city on our own.

Day 14**Sep. 17 | Shanghai –> Honolulu | (B, L)
This morning, we will visit the Bazaar or Open Market at the City God Temple.  We can enjoy shopping for souvenirs or checking out food shops.  After a Dim Sum Lunch, we will transfer to the Shanghai Pudong International Airport for our return flight. 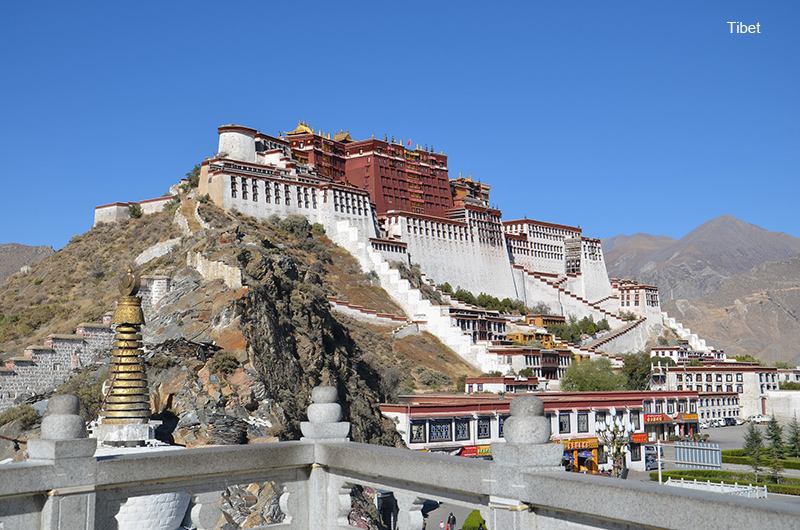 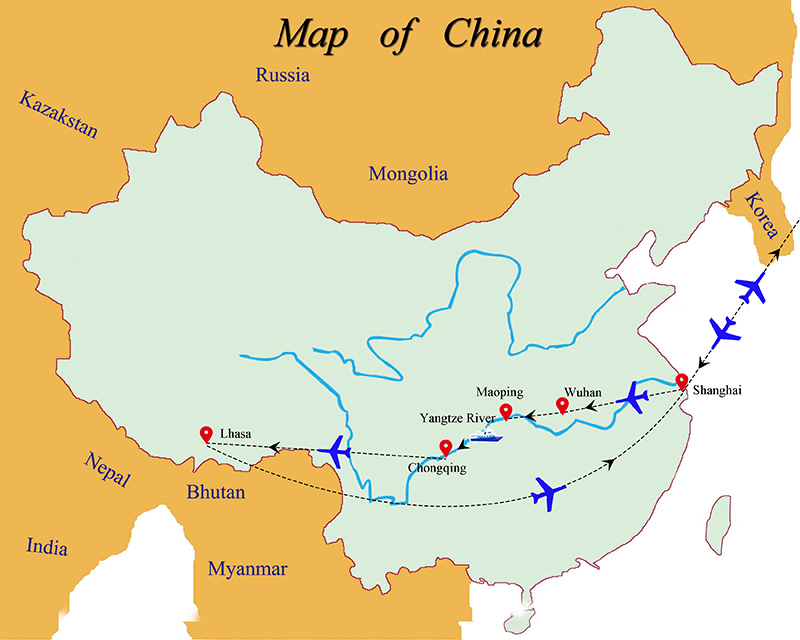 CHECK OR CASH PAYMENT ONLY.  A deposit of $350 per person is required at the time of application.  The balance is due 70 Days Prior To Departure.  In the event payment balance is not made within the required time period, Air and Sea Travel Center reserves the right to cancel reservations and charge a cancellation fee.