Day 1**  Honolulu –> Kansai (Osaka)
We begin our journey by boarding an international flight to Kansai Airport, the gateway city to Osaka.  Meals and snacks will be served on the plane.

Day 2** Osaka
Arrive at Kansai International Airport.  We will meet with an Air and Sea Travel Representative who will escort us to our hotel.

Day 3** Osaka (Day trip to Nara) | (B, L)
After breakfast, we will transfer to Nara.  Nara Park is a public park and one of the “Places of Scenic Beauty” designated by the Ministry of Education, Culture, Sports, Science and Technology (MEXT).  Over 1,200 wild Sika Deer freely roam the park and have become a symbol of the city and designated a natural treasure.  According to local folklore, deer from this area were considered sacred due to a visit from Takemikazuchi-no-mikoto, one of the four gods of Kasuga Shrine.  Killing one of these sacred deer was a capital offense punishable by death until 1637.  Today, visitors can purchase “deer-crackers” to feed them.  Todaiji, also known as Great Eastern Temple, is one of Japan’s most famous and historically significant temples and a landmark of Nara.  Todaiji’s main hall, the Daibutsuden (Big Buddha Hall) is the world’s largest wooden building, despite the fact that the present reconstruction of 1692 is only two thirds of the original temple hall.  The massive building houses one of Japan’s largest bronze statues of Buddha (Daibutsu).  The 15 meter tall, seated Buddha represents Vairocana and is flanked by two Bodhisattvas.  Afterward, we will return to Osaka and take a city tour.  Osaka and Takoyaki – you cannot have them separated under any circumstances.  Takoyaki Making will be arranged today.  As the third largest and second most important city in Japan, Osaka has been an economic powerhouse for many centuries.  First stop is Osaka Castle.  The former residents of Osaka Castle were the wives of a 16th century Japanese ruler named Toyotomi Hideyoshi.  We will visit the Castle Tower which houses an informative museum about the castle’s history and Toyotomi Hideyoshi.  It was the largest castle at the time.  After that, we will enjoy shopping in Shinsaibashi, the largest and best known shopping area in Osaka where many boutiques and specialty shops attract local people and visitors.  The Shinsaibashi evolved from the arcaded streets “Shinsaibashi Shopping Street”.  With a history of 380 years, it was already an established shopping area in the Edo Period.  Shops of all kinds and for all ages line the street, a roofed arcade 600 meters long.  Dōtonbori is another principal tourist destination in Osaka.  One of the area’s most prominent landmarks and icon of Osaka is “The Glico Man”, a billboard for confectionery company Glico displaying the image of a runner crossing the finish line.  We can enjoy our dinner in this busy street.

Day 4** Osaka | (B)
Today’s highlight is Universal Studios Japan, the first theme park under the Universal Studios brand built in Asia in 2001 with a collection of world-class entertainment for all ages to enjoy.  The park occupies an area of 39 hectares and is one of the most visited amusement parks in Japan.  Universal Studios Japan currently has eight sections: Hollywood, New York, San Francisco, Jurassic Park, Waterworld, Amity Village, Universal Wonderland, and the Wizarding World of Harry Potter.  You will be able to enjoy many amusement rides, ranging from child-friendly carousels to thrilling roller coasters and simulators based on popular movies such as Spiderman, Back to the Future, Terminator 2, and Jurassic Park.  In addition to rides, the park offers many opportunities to take pictures with popular characters’ mascots such as Snoopy, Hello Kitty and the muppets of Sesame Street.  There are also various shows put on every day, including a Night Parade featuring illuminated floats. It’s time to refresh yourself after a whole day adventure.  Just outside the park’s gates is Universal Citywalk Osaka, a shopping mall with many restaurants and shops, including stores selling Universal Studios merchandise and Osaka souvenirs.

Day 5** Osaka  Mishima – Atami |  (B, D)
Today, we will take a bullet train from Osaka to Mishima on the “Hikari” Shinkansen.  The Shinkansen is a network of high-speed railway lines in Japan.  “Shinkansen” literally means new trunk line, referring to the high-speed rail line network.  Japan’s Shinkansen network had the highest annual passenger ridership (a maximum of 353 million in 2007) of any high-speed rail network until 2011 and the total cumulative passengers are now over 10 billion.  Upon our arrival, we will visit Izu Muranoeki, a food theme park that gathers all of Izu’s prized local specialties into one location. It hosts a wide variety of stores! You can find eggs, fish, tea, rice, and tofu specialty stores, a bakery famous for its white bread which uses water from Mt. Fuji, a restaurant which uses local produce, a rice bowl specialty store—”Maguro Dojo“—which tops its don bowls with a mountain of Izu seafood, and more.  Please enjoy your own lunch here.  After lunch, let’s move to Mishima Skywalk, a 400 meters long, making it Japan’s longest pedestrian suspension bridge.  It’s really a sight to see from afar, but you can do more than just view it. Conquer your fear of heights in a big way while taking in the 70.6-meter drop of the forest, Mount Fuji, and Suruga Bay (Japan’s deepest bay).  Tonight, we will have dinner at our onsen hotel.

Day 6** Atami – Hakone – Tokyo | (B, L)
After breakfast, we will take a Komagatake Ropeway, allowing us to take a spectacular view of the crystal-clear blue waters of Suruga Bay and the grandeur of Mount Fuji on a fine, sunny day.  We will also take a Sightseeing Cruise on Lake Ashi on a medieval sailing vessel and enjoy picturesque views of Mt. Fuji.  After lunch, we will visit Hakone Gora Park, Japan’s first garden in the French style, opened in 1914 in Gora, the terminus of the Hokone Tozan railway line. French style formal gardens are usually on an expansive plot of level ground, with ponds and other features in symmetrical geometric shapes, but Gora Park is built on a slope.  The wide-open space of the park, surrounded by mountains and open skies, is famous for its multitude of flowers. The park offers a range of facilities, such as the Tropical Plant Pavilion, a tea room, and workshop studios, giving visitors a host of different experiences in one place.  Today, we will attend a Sandblasting Workshop and design your glass.

Day 7** Tokyo | (B)
Today’s highlight is Sanrio Puroland, an indoor theme park located in Tama New Town, Tokyo that attracts over 1.5 million visitors each year.  Opened on December 7, 1990, the theme park is run by the Sanrio Company and hosts various musicals, restaurants, attractions, and theme rides using popular characters such as Hello Kitty, My Melody, Cinnamonroll, and Jewelpet.  The main live performance is Sanrio Heartful Parade, “Believe”.  Visitors are thrilled by the acrobatic show and can enjoy “Kitty’s House” by peeping into rooms such as the living room and bathroom.  Afterwards, we will transfer to another popular shopping district –Harajuku, the most popular shopping district for the younger generation in Tokyo.  It is the center of Japan’s most extreme teenage cultures and fashion styles, but also offers shopping for adults and some historic sites.

Day 8** Tokyo | (B)
Today, we can rediscover the child in us at Mickey Mouse’s hometown – Tokyo DisneySea.  This is the fourth most visited theme park in the world.  Children young and old enjoy the sights and attractions here.  Inspired by ocean tales and legends, the seven themed ports of Tokyo DisneySea offer a wealth of fun attractions and entertainment bursting with imagination.  This venue boasts several attractions including the Mermaid Lagoon, American Waterfront, Port Discovery, Mysterious Island and Mediterranean Harbor.

Day 9** Tokyo – Narita –> Honolulu | (B)
This afternoon, we will visit Tsukiji Market, the largest wholesale market for fresh fish, fruits, and vegetables in central Tokyo.  Over ten warehouses serve as the distribution centers for food products.  Handling 2000 tons of marine products every day, it has become one of the world’s largest fish markets.  We will end our tour by visiting Tokyo’s most famous upscale market shopping, dining and entertainment district – The Ginza, featuring numerous department stores, boutiques, art galleries, restaurants, night clubs and cafes.  After a long day, we will transfer to the Narita International Airport for our return flight to Honolulu, taking with us the lasting memories of this wonderful trip. 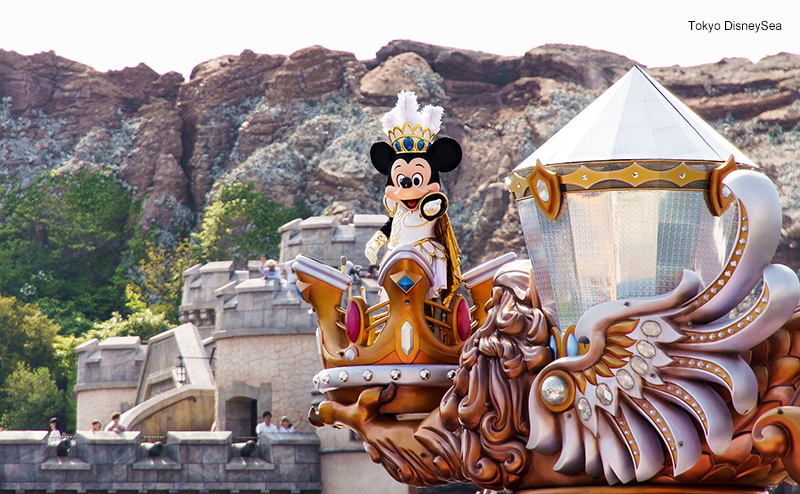 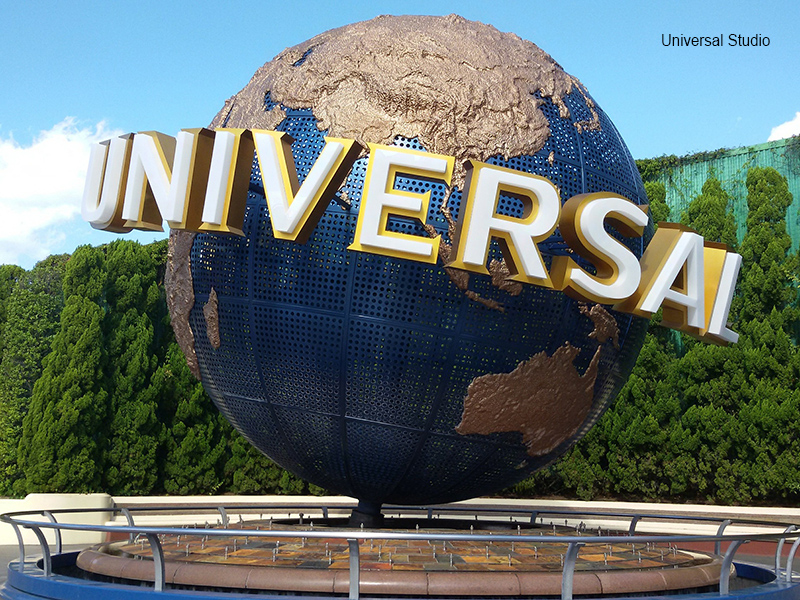 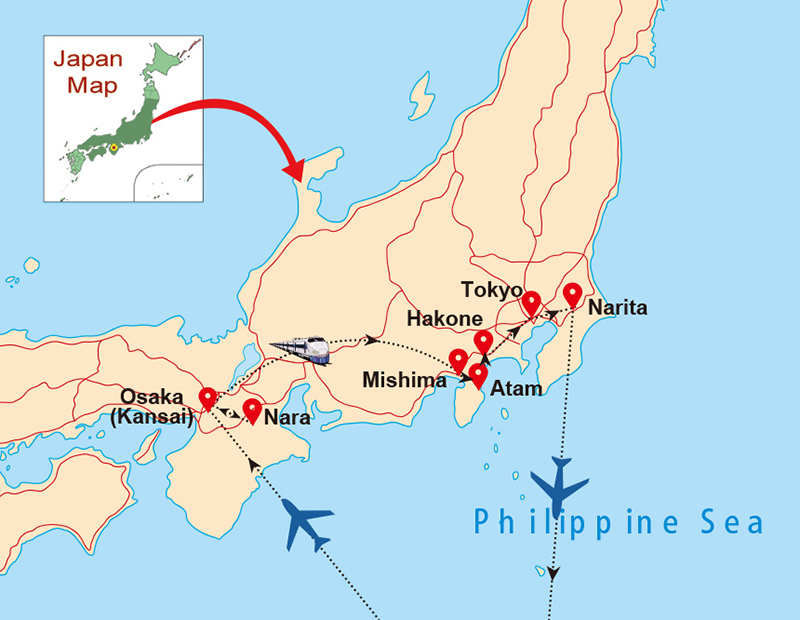 *** We strongly recommend purchasing travel insurance when you make a reservation ***