Day 1-2**Apr. 9-10 | Honolulu –> Beijing
We start our vacation by boarding an international flight to Beijing, the capital of China and an ancient city of great splendor.  Meals and snacks will be served on the overnight flight.

Day 3**Apr. 11 | Beijing –> Zhengzhou–Dengfeng | (D)
Upon our arrival at the Beijing International Airport in the morning, we will take a connecting flight to Zhengzhou, is the capital city of Henan Province and located in the central of China, is one of the eight National Central Cities serving as the political, economic, technological, and educational center of the province, as well as a major transportation hub in China.  We will meet with an Air & Sea travel representative who will escort us to our hotel in Dengfeng.

Day 4**Apr. 12 | Dengfeng | (B, L, D)
After the hotel breakfast, we will start exploring the beautiful city – Dengfeng, a county-level city in Zhengzhou and located at the foot of Mount Song, one of the most sacred mountains in China.  The city is one of the most renowned spiritual centers of China and home to various religious institutions and temples such as the Taoist Zhongyue Temple, the UNESCO World Heritage Site Buddhist Shaolin Temple, and the Confucian Songyang Academy.  Tonight we will watch the Shaolin Chan Zong Show which cost 35 million Yuan to produce.  One hundred Kung Fu monks perform at the same time and the show is as grand as the Olympic Ceremony.

Day 5**Apr. 13 | Dengfeng – Luoyang | (B, L, D)
Today’s highlight is a Shaolin Temple, the home of Chinese martial arts (Kung Fu) and China’s Oldest Pagoda Forest where monks are buried.  We will visit the Martial Arts School to understand the life of a student in a Kung Fu school.  After the special Dengfeng Roast Duck Lunch, we will drive to Luoyang where the best peonies are grown.

Day 6**Apr 14 | Luoyang | (B, L, D)
Today’s highlight is the Peony Garden and Peony Gene Pool.  The beautiful and graceful peony is the national flower of China and is called the “King of Flowers”.  Today there are more than 300 varieties of peonies in Luoyang.  People from around the country and abroad are attracted to Luoyang when the peony flowers are in full bloom.  In the afternoon, visit Longmen Grottoes. This UNESCO World Heritage Site is one of the three major grottoes in China constructed more than four hundred years ago.  Also, enjoy the most famous Luoyang Water Feast (Luoyang Shui Xi) that features many kinds of soup for dinner.

Day 7**Apr. 15 | Luoyang – Pingyao | (B, D)
After breakfast, we will drive to Pingyao, a city listed by UNESCO as a World Cultural Heritage.  Pingyao’s old town is typically considered the best ancient walled city in China and is on many lists of the best walled cities in the world.  Picture a period film showing ancient China – and you won’t be far off.  We will transfer to a Shanxi tour bus as we enter Shanxi province.  Upon arrival, we check into our hotel to enjoy the charming old style courtyard hotel with special Kamg Style Bedrooms in the walled city of Pingyao.  Pingyao Merchant’s Traditional Banquet will be served in the evening.

Day 8**Apr. 16 | Pingyao | (B, L, D)
Today we will spend the entire day in the ancient town.  Visit Ancient Ming and Qing Streets, the City Wall of Pingyao, and the Rishengchang (Sunrise Property) where the earliest bank started in China.  Noodles were one of the popular and main dishes in ancient China.  Today, we will have a hands-on experience making Pingyao Style Noodles.  And we will enjoy the noodles for lunch.  We can also participate in Coloring Chinese Opera Mask and/or Chinese Paper Cutting.  The opera mask can be an elegant addition to any art collection, a wall hanging, or part of a special costume.  Paper cutting is a unique art form that has existed for thousands of years featuring both national and regional themes.

Day 9**Apr. 17 | Pingyao – Taiyuan | (B, L, D)
After breakfast, we will go to Qiao’s Compound, built on 4,220 square yards.  There are six main courtyards and twenty minor ones within the compound.  These compounds belonged to one family in the Qing Dynasty.  It has been featured in many famous movies such as the “Red Lantern”.  Then we drive to Taiyuan, the capital city of Shanxi Province, and visit Jinci Temple on the way.

Day 10**Apr. 18 | Taiyuan – Datong | (B, L, D)
After breakfast, visit the Coal Museum of China, which is the symbol of Taiyuan city.  The highlights of the tour are the display of coal formation, a 4D Theater show, and a coal cart ride through a replica of an underground coal mine.  After lunch, drive to Datong, the second largest city in Shanxi Province.  On the way, we will pass through YanMenGuan Pass, the location of one of the most important fortresses on the Great Wall of China.  Surrounded by tall mountains peaks and accessible only by an ancient road which works its way between the cliffs, this pass was the logical invasion point for foreigners (especially Mongolians) looking to pour into China.  Over a 2,000 year period, over 130 major battles took place at this strategically important mountain bottleneck.

Day 11**Apr. 19 | Datong | (B, L, D)
The scenic spots we will see today are “must see” places according to many websites and TV programs when visiting Datong.  In the morning, we drive to Hunyuan to visit the Hanging Monastery (Xuankong Si) which is built on extremely sheer cliffs above Jinlong Canyon.  Construction dates back 1400 years to the Northern Wei Dynasty.  In the afternoon, we visit the Caves of Yungang Grottoes which house over 51,000 Buddha sculptures completed during the Northern Wei Dynasty (460-494AD).  It extends one kilometer from east to west, and represent the outstanding achievement of Buddhist cave arts.  This UNESCO World Heritage Site is staggering, beautiful and marvelous.  We will have our Farewell Dinner tonight.

Day 12**Apr. 20 | Datong – Beijing | (B, L, D)
Enjoy some free time in the morning before we check out of our hotel.  After lunch, we drive back to Beijing.  We will enjoy a dinner before transferring to the Beijing International Airport. 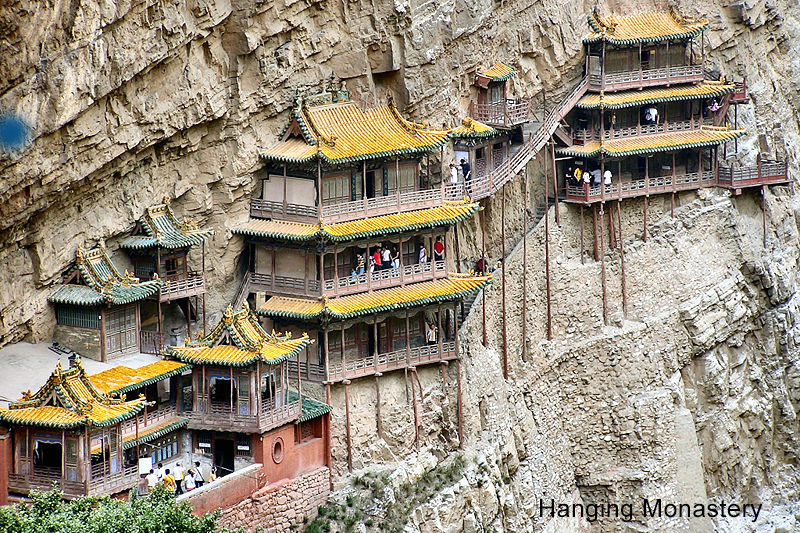 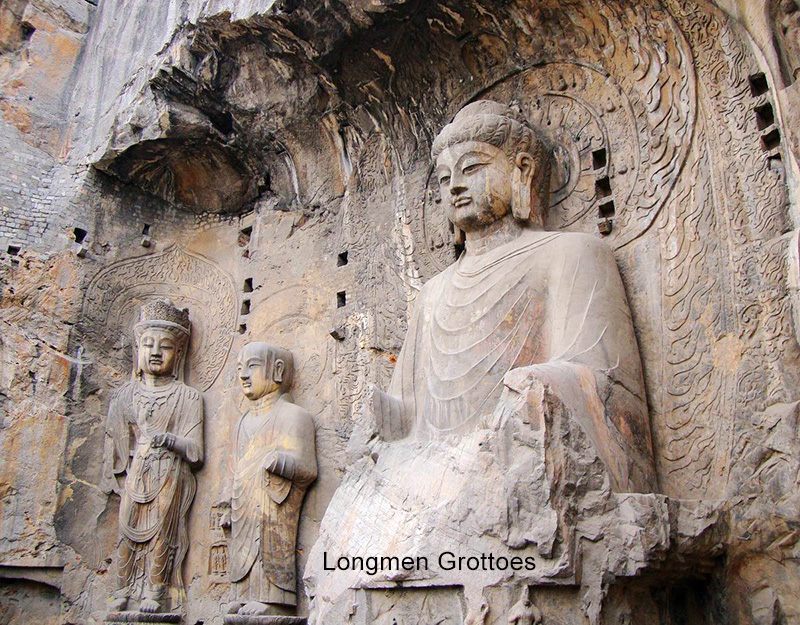 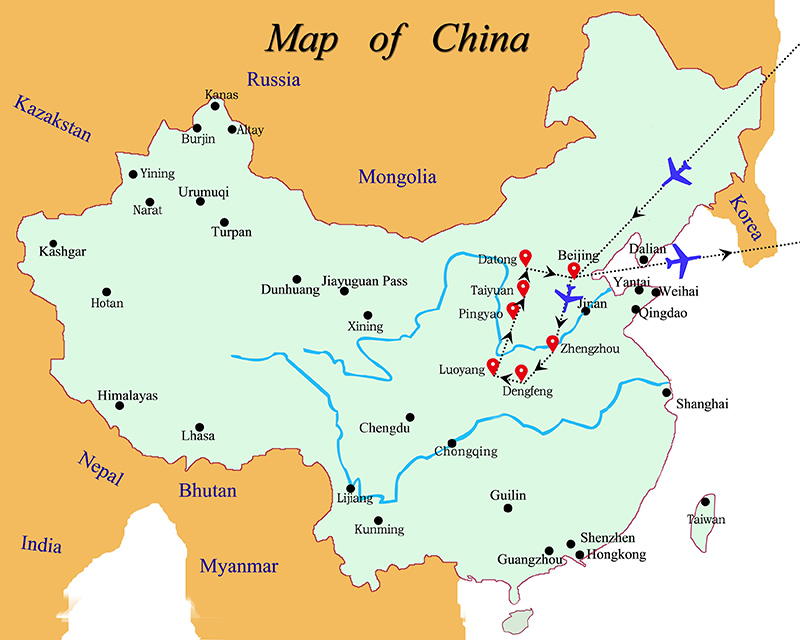 CHECK OR CASH PAYMENT ONLY.  A deposit of $350 per person is required at the time of application.  The balance is due 70 days prior to departure.  In the event of balance payment is not made within the required time period, Air and Sea Travel Center reserves the right to cancel reservations and charge a cancellation fee.

We strongly recommend purchasing travel insurance when you make a reservation.