Day 1** Honolulu –> Taipei
We start our vacation by boarding an international flight bound for Taipei in the afternoon.  Meals and snacks will be served on the plane.

Day 2** Taipei
Upon arrival in Taipei, we’ll proceed to immigration & customs.  Board a shuttle bus to an overnight hotel.

Day 3** Taipei –> Bangkok | (B)
In the morning, we will return to Taipei Airport and fly to Bangkok.  Upon arrival at Bangkok International Airport, an Air & Sea Travel Center representative will meet us and escort us to our hotel.  Enjoy our stay in our Premier Executive Room at the hotel and use of the Premier Lounge where complimentary refreshments are available.

Day 4** Bangkok –> Kathmandu | (B, D)
This morning, depart for Kathmandu, the largest city and capital of Nepal, the namesake of Kathmandu Valley and also known as the fabled and inaccessible Shangri-La of the world.  Upon arrival, we will visit Swayambhunath Stupa.  It’s an UNESCO World Heritage Site and known to tourists as the Monkey Temple, Kathmandu’s most important Buddhist shrine.  A cubical structure painted with eyes of Buddha looking in all four directions has become the quintessential symbol of Nepal.  The earliest written record of the Swayambhunath Stupa’s existence is a 5th-century stone inscription, but scholars believe there was probably a shrine here as early as the 1st century.  After that, we will transfer to our hotel and enjoy dinner.

Day 5**  Kathmandu | (B, L, D)
After breakfast, we will begin our full day trip in Kathmandu.  The first stop is the Kathmandu Durbar Square, listed as one of the Cultural World Heritage sites by UNESCO, and a cluster of ancient temples and palaces.  The square is known to be the social, religious and urban focal point of the Capital City and is presently known as Hanuman Dhoka, a name derived from the statue of Hanuman.  Then we will head to Boudhanath Stupa, the largest stupa in Nepal and the holiest Tibetan Buddhist temple outside Tibet.  It is the center of Tibetan culture in Kathmandu and rich in Buddhist symbolism.  As of 1979, Boudhanath is an UNESCO World Heritage Site.  Along with Swayambhunath, it is one of the most popular tourist sites in the Kathmandu area.  After lunch, we will continue our trip to Patan Durbar Square.  It is one of the three Durbar Squares in the Kathmandu Valley, all of which are UNESCO World Heritage Sites.  The Square is located at the center of Lalitpur – “The City of Fine Arts,” and one of the cities in Kathmandu Valley where the medieval arts and architecture still remain in its original state.

Day 6** Kathmandu –> Pokhara | (B, L, D)
After a leisurely breakfast, we will head to the airport and board a short flight to Pokhara.  Pokhara is the third largest city of Nepal and the most popular tourist destination in the country.  Upon arrival, we will begin our Pokhara adventure to Devi’s Fall, a waterfall located in Kaski District.  An interesting aspect of the falls is that the water flows about 500 feet through a natural tunnel at the depth of 100 feet from ground level.  The source of water is from the dam of Phewa Lake.  Across the road from Devi’s Fall is Guptesore Cave which contains a huge stalagmite worshiped as a Shiva lingam.  Also known as Gupteshwor Mahadev Cave, this venerated cave has two parts.  The first part is more than 40 meters, including a natural Cave and temple of Lord Shiva used for prayer.  The second part starts after the temple, which extends to the bottom of Devi’s Fall.  We will stop by a Tibetan Refugee Camp, where the main objective is to help Tibetan refugees do something productive and support themselves.  While walking around in the camp, we can buy products handmade by the Tibetan people.  Afterwards we will have an opportunity for a Boat Ride on Phewa Lake. The boat trip in the lovely Phewa Lake is the foremost attraction in Pokhara and a nice way to spend a quiet afternoon paddling out into the middle of the lake.

Day 7** Pokhara –> Kathmandu | (B, L, D)
In the early morning, we will enjoy an amazing Sunrise Sightseeing at Sarangkot.  After breakfast, we will head to the airport and fly back to Kathmandu.  After lunch, we will visit Bhaktapur Durbar Square, another UNESCO World Heritage Site.  It is a conglomeration of pagoda and shikhara-style temples grouped around a Fifty-five Window palace of brick and wood.  The square is one of the most charming architectural showpieces of the Valley as it highlights the ancient arts of Nepal.  The golden effigies of kings perched on the top of stone monoliths, the guardian deities looking out from their sanctuaries, the wood-carvings in every place–struts, lintels, uprights, tympanums, gateways and windows all seem to form a well-orchestrated symphony.  After this spectacular sightseeing experience, we will have a chance to enjoy a special Dinner at Atithi Satkar Restaurant with an Ethnic Cultural Show.  Then we will return to our hotel, ending today’s adventure.

Day 8** Kathmandu | (B)
After enjoying breakfast at the hotel, we will have a day of leisure.  Explore the charming city on your own or relax and roam around the hotel.

Day 9** Kathmandu –> Paro – Punakha | (B, L, D)
Today we will fly to Paro, one of the most impressive towns in Bhutan.  Due to Bhutan’s location and unique geographical and climatic variations, it is one of the world’s last remaining biodiversity hotspots.  Upon arrival, we will visit Paro Dzong, Bhutan’s most impressive and well-known dzong, and perhaps the finest example of Bhutanese architecture as well.  The massive buttressed walls that tower over the town are visible throughout the valley.  After that, we will proceed to Punakha, the old capital of Bhutan, and stay overnight in Punakha.

Day 10** Punakha – Thimphu | (B, L, D)
After breakfast, we will visit the Punakha Dzong, also known as Pungtang Dewa chhenbi Phodrang, the administrative center of Punakha District.  It is the second oldest and second largest dzong in Bhutan and one of its most majestic structures.  After that, we will return to Thimphu, the capital of Bhutan.  We will visit Tashichoe Dzong, also known as the Seat of Government.  It was initially built in the 17th century and rebuilt in early 1960s by the third King Jigme Dorji Wangchuk.  It is the main secretariat building that houses the throne room of His Majesty and is a summer residence of the central monk body.  Simtokha Dzong, about 3 miles south of Thimphu on the road to Paro and Phuentsholing, is a guard for the entrance into Thimphu. The Dzong is officially known as “Sangkak Zabdhon Phodrang“, the oldest Dzong in Thimphu and a gateway to the valley.  After having an amazing sightseeing experience, we will transfer to our hotel and stay overnight in Thimphu.

Day 11** Thimphu – Paro | (B, L, D)
Today, our sightseeing trip begins at the famous Memorial Chorten, built in honor of the third king HM Jigme Dorje Wangchuk, Changlimithang and Changangkha Lhakhang.  The Memorial Chorten, also known as the Thimphu Chorten, is a prominent landmark in the city with its golden spires and bells.  This chorten is unlike other chortens as it does not enshrine the mortal remains of the King.   Only the King’s photo in a ceremonial dress adorns a hall on the ground floor.  After lunch, we will drive back to Paro.  Finally we will enjoy a leisurely stroll around Paro town and enjoy the serenity of the small town.

Day 12** Paro | (B, L, D)
After having an early breakfast, we will have a day excursion to the magical monastery known as Taktsang Monastery or Tiger’s Nest.  It is said to be one of the main monasteries that contributed to the start of Buddhism in Bhutan.  The beauty of Taktsang Monastery is clouded with impossibilities that will definitely amaze all of us, since the monastery is situated on the edge of a mountain cliff, one thousand meters above Paro Valley.  Reaching the temple will be a breath of fresh air; moreover, the feeling of exhaustion will definitely be replaced by amazement with the beauty of the monastery and how it emanates a sacred feeling that will make us calm and focused.  The Tiger’s Nest Monastery is one of the most distinct monasteries in Bhutan because of its location.

Day 13** Paro –> Bangkok | (B)
After breakfast, we will board a flight back to Bangkok.  After arriving at Bangkok International Airport and transferring to our hotel, we will have free time for the rest of the day. The only nation in Southeast Asia to escape colonial rule, Thailand offers a rich and ancient culture that thrived unhindered by Western influence.  Proud and strongly nationalistic, the Thai people call their nation Muang Thai – “Land of the Free.”

Day 14** Bangkok | (B)
Bangkok is the capital and most populous city of Thailand.  Founded in 1782 by King Rama I, Bangkok is home to more than eight million people.  The capital’s proper name is Krung Thep – the “City of Angels.”  After enjoying breakfast at the hotel, we will have a day of leisure.  Explore the charming city on your own or relax and roam around the hotel.

Day 15** Bangkok –>  Honolulu | (B)
We will take a flight back to Honolulu via Taipei, taking home lasting memories of a magnificent trip to Nepal and Bhutan. 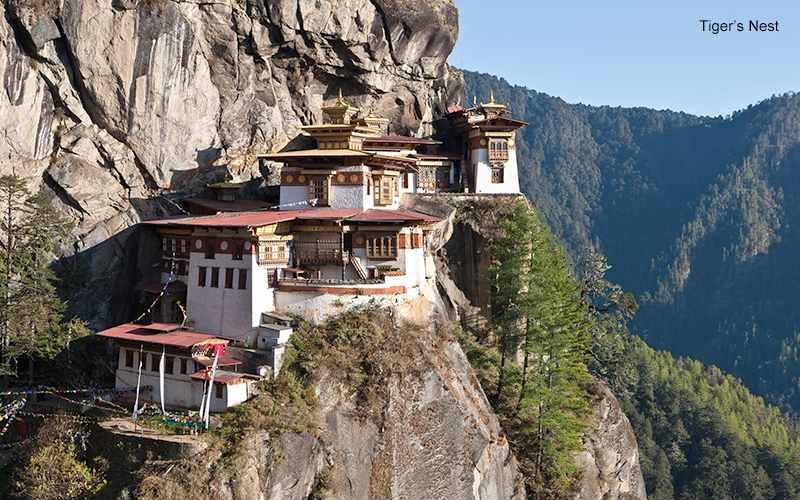 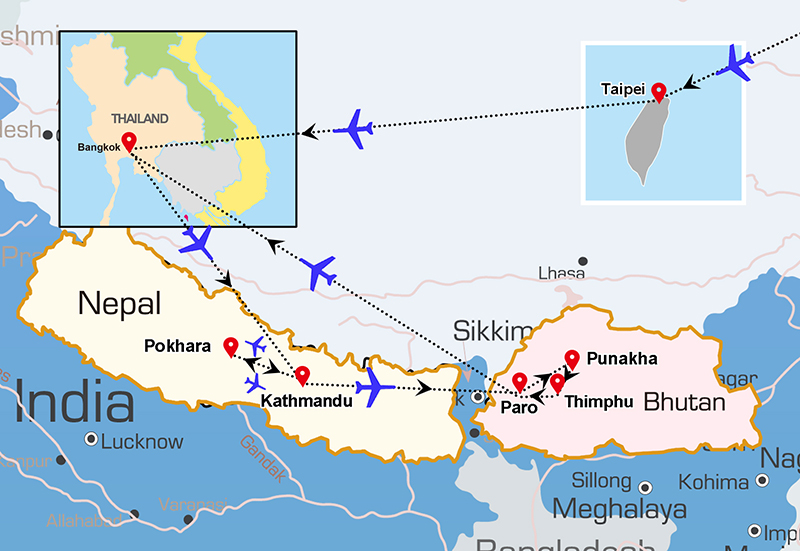 Written notice is required for any cancellation.

** $1,000 deposit is non-refundable if you cancel after Dec.1, 2019.
** TBA 50% of total price plus any other service fee caused from the cancellation;
** From TBA to departure or withdrawing during the tour shall be regarded as willingly giving up all rights concerned, 100% of total price, and request for other services as a substitute shall not be accepted.